For years, studded winter tires had a bad rap: They were loud and some districts worried they were creating ruts in the pavement. However, since studded tires have always offered superior safety on hard-packed snow and ice, many drivers were willing to sacrifice that clicking sound for significantly better winter braking and grip.

Today, though, the technology behind studded winter tires has changed dramatically to improve ride comfort and road impact while continuing to deliver optimum winter safety. And yet many drivers see studded tires for what they once were: noisy, hard on roads, and ineffective. So, we’re dispelling the most common myths we hear about studded winter tires.

“It’s true—studded tires used to be loud and that was a deterrent for some people,” says Carey Hull, director of retail products, Kal Tire. “But now some manufacturers use a kind of cushion to dull that noise, and you can barely hear them.”

Nokian Hakkapeliitta 8 studded winter tires, for example, use a soft layer of rubber between the tire and the stud base that acts like a spring to reduce road noise. 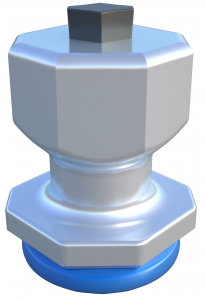 That eco-friendly stud cushion on Nokian studded tires also dampens the impact of the studs on pavement. And it might seem surprising, but some manufacturers have actually doubled the number of studs on their tires (up to nearly 300 on one tire model)—and yet many studded winter tires have less wear on roads.

“Even though there’s more studs, they’re actually less intrusive, so they don’t chew up roads the way they did 30 years ago,” says Hull.

Today, studded tires can be used in every province and territory—though with restrictions about time of year and total number of studs in some regions—except for Ontario, which restricts use to its northern region.

In recent years, tire makers have increased the number of tread blocks and changed the placement of studs so they no longer sit in rows, but are spread out across the tread face so they’re not lined up on top of one another.

“With more even distribution, you’re getting better lateral (side to side) and longitudinal (front to back) grip for superior braking,” says Hull.

On top of a more strategic stud placement, Nokian introduced the concept of placing a sharp end on the metal pin, and positioning it in the direction of driving to claw ice for superior traction.

“The question is, would you want to stop 10 meters shorter on an icy road?”

Fact:  Stud life is longer than ever

Stud placement on the tread and at the factory have significantly extended the life of studs.

“In the old days, studding was done by hand with a gun that was much longer, bigger, and heavier, and if the stud wasn’t all the way in, it would pop out,” says Hull. “A lot of the tires we purchase today come factory-studded.”

A number of those factories, such as the one that makes the Multi-Mile Arctic Claw XSI, is also studding tires more strategically, placing stud pin holes on the two outermost ribs to help keep the studs in place longer while delivering optimum traction on ice.