BC winter tire legislation—which permits the use of M+S tires on highways—begins next week, and many BC drivers may think M+S tires are safe in winter conditions

With BC’s winter tire regulations about to take effect on most routes in BC, Kal Tire is helping drivers to understand what makes Mud + Snow (M+S) tires different from winter tires, and why winter tires are much safer in cold weather conditions, including snow and ice.

“It can be confusing for drivers because legislation in BC allows for M+S tires on mountain passes and highways during the winter months, but they are not winter tires,” says Mike Butcher regional director for urban retail stores, Kal Tire.

Before 2014, only winter tires bearing both the M+S designation AND the mountain snowflake severe service designation, were allowed on select mountain passes and highways starting October 1.

“M+S tires are all-season tires The M+S designation is only an indication of tread design and is not compound related. The tread features bigger tread blocks and wider spaces between those tread blocks compared to summer tires, which helps expel mud and snow, but the rubber compound contains less natural rubber. That means M+S tires will get stiff once temperatures start dipping below +7C,” says Butcher. “Drivers won’t see the reliable traction, braking or cornering they’re probably hoping for in the cold months.”

Winter tires, on the other hand, have both the necessary tread design and compound to give tires strong grip. Bearing both the M+S symbol AND the mountain snowflake symbol, winter tires have met specific industry-established snow traction performance requirements and have been designed specifically for use in cold weather and severe snow conditions.

“True winter tires are a much safer option for those who travel through BC’s mountain passes and rural highways,” says Butcher, adding everyday cornering and braking is also improved for those who face temperatures at or below +7C as well as ice, snow and slush.

Infographic – The M+S tire is not a winter tire 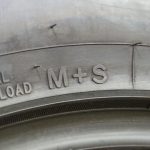 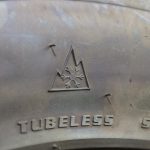