To help promote and support one of BC’s most celebrated resources, a tire dealer with BC roots has an unlikely giveaway for customers buying a set of tires: sockeye salmon.

“Some of our senior managers were out salmon fishing over the summer, and they came up with the idea of teaming up with local fishers and butchers to promote this wonderful resource we have”

“Some of our senior managers were out salmon fishing over the summer, and they came up with the idea of teaming up with local fishers and butchers to promote this wonderful resource we have,” says Greg Waring, Kal Tire’s VP marketing.

At 24 Kal Tire locations across the Lower Mainland, the first 3,600 customers who purchase a set of personal use passenger or light truck tires beginning Sept. 22 will receive a cedar plank and a coupon to pick up a full fresh-caught sockeye salmon, already filleted and flash frozen, at any Meridian Meats & Seafood and Meridian Farm Market location.

All of the wild salmon, an Ocean Wise-recommended species, have been caught in the Johnstone Strait near Campbell River, BC, by First Nations commercial fisherman, Josh Duncan and his crew.

“Opportunities like this with Kal helps pave the way for other fishermen and hopefully other companies who want to support the wild salmon industry,” says Duncan, who heads R.A. Roberts Fishing Ltd. He also sits on the board of directors for the BC Salmon Marketing Council, committed to sustaining one of BC’s top resources by harvesting it with tradition, skill, care and pride.

Along with his crew, Duncan, who began salmon fishing in the Johnstone Strait as a boy, will fish the strait in a 93-foot fishing vessel named Western King, turning 50 years old this year and owned by hereditary chief Tony Roberts Sr. With each sockeye weighing about five pounds, Western King will haul nearly 20,000 pounds of salmon to shore for the Free BC Sockeye promotion.

“It’s a pretty cool and interesting way to get more of our product out there locally,” says Duncan, who made headlines in August when he dropped off 500 sockeye to the homeless and others lobbying for affordable housing in Vancouver’s Downtown Eastside. This year, there is plenty to go around: 2014 has been projected to be the year of the biggest sockeye salmon run in BC history as the nearly 72 million progeny of the epic 2010 salmon run migrate through the province.

The wild salmon caught by Duncan’s team for ‘Free BC Sockeye’ will be filleted and flash frozen by Grande Hale Seafood, distributed by Meridian Meats & Seafood and Meridian Farm Market, and served on cedar planks from Valleywood Remanufacturing in Lumby, near Kal Tire’s Vernon office.

“Everyone gets excited about a good salmon run, and we’re really glad to partner with local butchers, local businesses and a local fisherman like Josh who believes in giving back,” says Waring. “This way we can work together to promote a vital BC resource and celebrate a successful season.”

If you love salmon and you need new tires this year, beat the winter tire rush and enjoy optimum safety. Summer and all-season tires become hard at 7 C. Either choose winter tires, or, for superior year-round performance, choose all-weather tires which remain flexible at temperatures above and below 7 C. 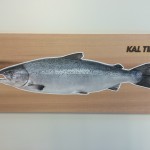