Kal Tire pothole survey shows that only half the drivers aware of pothole-related vehicle damage have had the problem fixed. What does that mean for driver safety?

On the heels of one of Canada’s most severe and bizarre winters, a Kal Tire survey shows while nearly 72 per cent of motorists have hit a pothole this winter, only half the people with pothole-related vehicle damage have fixed the problem—and Kal Tire says that could be putting drivers at risk.

“I think as Canadians, we get so used to potholes that we don’t realize how damaging they can actually be to our vehicles or how that damage can impact our safety on the road,” says Sean Thompson, mechanical program manager, Kal Tire.

“Sometimes all it takes is one bad hit to the wheel to knock your vehicle out of alignment and create shaking and wobbling or even loss of steering.”

Kal Tire’s pothole survey, which polled more than 1,000 Canadians from BC to Ontario, showed 40 per cent of those who hit potholes this winter say it damaged their vehicle. The most common damage was to alignment (39 per cent).

“What we want drivers to know is that while some signs of pothole damage are immediately apparent, such as tire failure or rim damage, a lot of times you might not even know something is wrong,” says Bill Gardiner, automotive expert and TV personality, about how potholes can compromise vehicle safety. “The best thing to do is get your vehicle inspected, and then you know for sure.”

Tires & wheels—Even wheels with minor bending can lead to poor seals between the rim and the tire, potentially causing leaks and flat tires. Wheel damage can also cause vehicle shaking as well as reduced handling, steering and poor braking performance.

Alignment—Hitting a pothole can cause your wheels to become misaligned and no longer square to the vehicle. Misalignment can cause poor steering, irregular tire wear and vibrations that can lead to driver fatigue.

Suspension—Repetitive minor pothole impacts, or single dramatic ones, can cause suspension issues, reducing the ability to steer, absorb and dampen shock, maintain road contact and support the vehicle’s weight.

Vehicle—Dramatic impact against deep potholes can create damage ranging from a scratched undercarriage to broken mechanical components in extreme cases.

The following are the key findings from Kal Tire’s pothole survey:

“These are all problems that, if dealt with early on, have a much better chance of costing less and giving you less hassle,” says Thompson. “No one wants to be on the road late at night and hear a rim about to wobble off, or feel their vehicle get ‘the shakes.’ Even having an alignment performed will save on premature tire wear, so it’s about safety and savings.”

* A total of 1,049 Canadian motorists (from BC to Ontario) who drove this past winter were surveyed by Sentis Research. The online survey was conducted from Feb. 15-22, 2017. Results are considered accurate within +/-3%, 19 times out of 20. 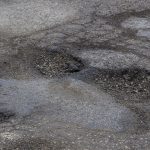 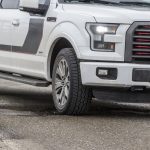 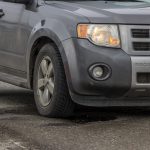 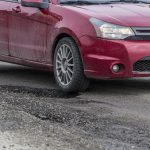 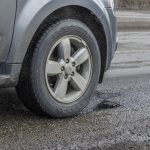 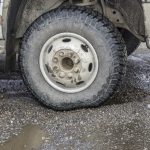